As soon as he heard about the bombing in Makassar on Palm Sunday, Open Doors local partner Ari* immediately travelled to Makassar to support and pray with the affected believers. This is what he experienced, in his own words.

Yesterday, fellow Open Doors partner Agung* and I arrived at the church in the early afternoon. The church already had a police blockage. Since we did not have access, we went to the guard asking for permission to enter. They were surprised, and asked us, “Who are you?”

We introduced ourselves, “I am Ari, a pastor. I would like to meet with the priest.”

The policeman told us to wait for a while. After that, Father Tulak came out. We approached him but he was hesitant to meet us at first. He didn’t know who we were, until we told him that we spoke to him on the phone. “Thank you so much, thank you for praying for us. Thank you for sharing our story to our brothers and sisters around the world,” he said.

The priest then shared that nine of his church members were injured, out of the 150 who had come to church for Palm Sunday. The capacity of the church was 400, but because of Covid, only 150 came. They had services five times a day.

The bomb exploded after the second service. The church members went out from the church through the second gate – the small gate. It was the main gate that was bombed, though thankfully it was closed – but many were injured because of the shrapnel. It was the metal and iron that hurt the people.

Because this is the first time it happened in Makassar, some of the churchgoers feel fear, of course. This morning, the priest still opened the church to do a service. Every day they do morning services – this morning, only ten attended. I think the members are still worried – some are still not ready to come back.

There is so much religious intolerance in Indonesia – not just in Makassar. Sometimes, there are Muslim groups who stop us from doing Sunday services. Muslims sometimes try to use politics to control Indonesia. When we look at the situation now, the Central Government is trying to combat intolerance. This is why our president chose someone from the city with the biggest Muslim majority as religious minister – and this minister said he wanted to get rid of terrorism. This is good.

We visited the hospital this morning. We were there to visit Cosmas, the guard who stopped the bombers from entering the church. Even though I was already with the priest, the guard said all of us couldn’t go in together, only two by two, as the injured believers were still under police protection. We asked if I and the priest could go in.

Suddenly, a high-ranking police officer walked in. He immediately recognised the priest, so he allowed us all to enter to visit Cosmas.

When we entered the room, Cosmas saw the priest and said, “Hello father!”

Father Tulak asked him, “How are you?”

Cosmas replied, “I’m fine, father – only my face and my skin and my hand have been burned. I only have blisters.” Because of his burns, he shared that he would need surgery for his skin.

Inside the room, his wife and daughter were there, as well as police investigators. They were there to interview him as a witness to the bombing.

Representing the worldwide body of Christ

The priest then told Cosmas and his family that we came from Jakarta to visit them. And I told them that I represent the body of Christ around the world. "We’re here to let you know that we are standing with you in this situation – you are not alone. Many believers around the world right now are praying for you."

“Thank you so much for your empathy!” said Cosmas. Despite the situation, he and his wife were smiling and laughing with us. And then we prayed for them. After praying, I asked if we could give support. “Could we give financial support to show love to you?” Cosmas and his wife gratefully accepted.

I thanked Father Tulak. After this, we parted ways. Agung will connect with Cosmas and the priest in the coming days, and I am planning to come back to give support to a Muslim guard, who was also on duty when the bombing happened, and is injured. He isn’t a regular employee of the church, but he was assigned to the church when the bombing happened.

The most powerful part of this visit for me was when Father Tulak told me: "Through this bombing, we have a testimony to share to the world that God protects us. He always protects us. One of the guards was only one metre from the bomber, but he did not die, he was only injured. This is amazing protection from the Lord."

We are assessing how best we could help in the future, and I gave my number to the priest. We are hoping to continue working together for the injured church members – and others who were eyewitnesses to the bombing who are traumatised. Please pray for God to comfort them. And please pray for the priest – that he gets wisdom from God as to how best to serve.

* Names changed for the protection of our local partners

Order the World Watch List 2021 Top 50 booklet to help you pray for your persecuted family in Indonesia and other countries - as well as discovering testimonies, trends, articles and a map of worldwide persecution. 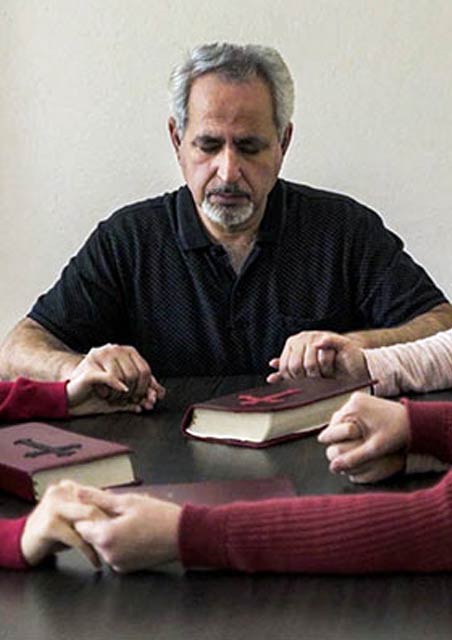