A local church leader has told Open Doors that Leah Sharibu is still alive, giving her family fresh hope that they will be reunited with her. Please continue to pray for Leah and her family. 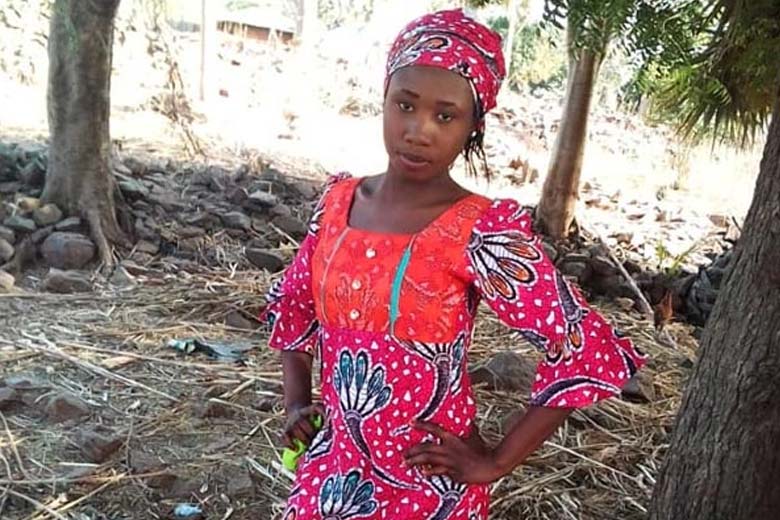 Leah Sharibu is still alive, according to a church leader who is supporting her family since she was kidnapped in 2018 by Boko Haram.

“From three sources, I can confirm that Leah is still alive,” Reverend Gideon Para-Mallam told Open Doors. “I can't go into too many details but one of my sources – who was recently released from Boko Haram captivity – confirmed that Leah was still alive. She was able to see her.”

"It has been almost four years since Leah's abduction,” Para-Mallam added. “What a traumatic experience for this teenage girl. But we are grateful to God that she is still alive. The news of her being alive should encourage our hearts to remain hopeful that one day Leah will be set free.”

In March, Leah’s parents wrote an open letter calling on President Muhammadu Buhari to fulfil his promise to get their daughter released.

The past year has seen the kidnapping of children in north eastern Nigeria reach endemic levels, helped by arms proliferation and government inaction. More than 1,000 children have been forcibly taken from their schools across five states in the region since December. More than 600 schools have been closed for fear of further attacks.

"We are distressed and disturbed because the kidnappings continue," said Para-Mallam. “It is only God who can guarantee the future of Nigeria right now. Many are discouraged and feel desolate. Let us pray that God will touch our political leaders so they will be able to see the challenges that are before us.”

Lord Jesus, thank You for the positive news that Leah is alive. Continue to strengthen her and her family, and surround them with Your peace and presence. Bring about her immediate release, and the release of all people in Nigeria held against their will. Provoke the government into decisive action on behalf of those suffering at the hands of armed bandits and extremists. Amen.

On 19 February 2018, over 100 girls were abducted from Leah’s school. Tragically, one of the girls died in captivity. All the others were released within a month – except Leah. Why was she the only girl who was kept? Because she refused to deny her faith in Jesus.

Since then, Leah has spent her 15th, 16th and 17th birthdays in captivity. In May, she will turn 18. Last year, news reached Leah’s family that she was still alive – through another woman who had been abducted. She hadn’t seen Leah, but she’d met another woman who had. This might seem like fragile hope, but it is a lifeline for her struggling family in the face of so little news.

Has Leah been forgotten?

Open Doors supporters are among many Christians around the world who are faithfully praying for Leah and her family – but there is a sense that others have forgotten about her. Nigeria’s President Buhari pledged to secure Leah’s freedom in the months after she was taken, and in 2019 there were assurances from the Nigerian government of ongoing negotiations. But things have gone quiet since then.

“I think it is safe to say that Leah is alive. But the silence from her captors and from the federal government is absolutely not good,” says Rev. Gideon Para Mallam, a friend of the Sharibu family, in an interview with Open Doors. “Indeed, no official news has come out about Leah this past year, neither from her kidnappers, nor from the Federal Government of Nigeria. The silence is troubling. Her parents deserve to be briefed by the government, at least covertly. But we are not getting any of that.”

Jo Newhouse, spokesperson for Open Doors’ work in sub-Saharan Africa, recognised that silence sometimes comes from discretion, but also calls for compassion: “We understand that hostage negotiations do not appreciate media attention because it makes the water murky. However, there can be much more compassion towards the families of captives, and that is why Open Doors has been urging for a dedicated position within government with the sole purpose of maintaining an active family liaison and an open and accessible channel of communication with the traumatised parents of the hostages.”

Like millions of Christian women and girls around the world, Leah is vulnerable both for her faith and her gender. Her name might be better known to Open Doors supporters than most, but she represents thousands of women and girls who have experienced similar persecution in sub-Saharan Africa and beyond. Boko Haram continue their onslaughts in sub-Saharan Africa, and even a global pandemic hasn’t slowed them down – as Rev. Gideon Para Mallam explains:

“In one day in December, just before Christmas, they kidnapped 70 people. They killed over 50 people. And then again, on Christmas Eve, they went to a number of villages in the Garkida area in Adamawa State and kidnapped a number of Christians. We also know about an attack by Boko Haram on a rice farm, in which they killed over a hundred people. So, despite the military offensives against them, Boko Haram still manages to cause havoc.”

Often, in such attacks, men are killed – and it is women and girls who are taken. Many families are prayerfully waiting for the return of their ‘Leah’s. Your prayers make such a difference, helping Leah’s family know they are not alone – and we know that ‘the eyes of the Lord are on the righteous and His ears are attentive to their prayer’ (1 Peter 3:12).

“They remain hopeful that Leah will be back,” says Rev. Para Mallam, about Leah’s family. “This whole experience has not broken their spirit. I am very glad about that, because we have been constantly praying and working for that not to happen. We need to uphold them in prayer, so that their spirits are not broken.”

Find out more about what it's like to be a Christian in Nigeria, and other countries where Christians face persecution. Your free World Watch List Top 50 booklet features testimonies from the persecued church and articles on the key trends to emerge from the latest report.