Dukashini, Sri Lanka: One year after the church bombings

Dukashini lost her mother in the Easter church attacks in Sri Lanka on 21 April 2019. A year on, she shares how Open Doors have helped her family - and reads Psalm 23.

The day of the attack

Every Sunday, Girija and her four children would go to the Zion church in Batticaloa, Sri Lanka. And every night she would sit down and read the Bible to her family.

Her husband, Prashanth, did not accompany her – as an illiterate day labourer, he was scared of losing work. “Come to church with us,” she would beg him. But he never did. “You go. I will come someday” – he said it that week, as he did every week.

On Easter day, 2019, Girija was inside Zion Church when a suicide bomber carried out an attack. Girija’s 12-year-old daughter Dukashini found her, sprawled on the floor, her little brother standing nearby crying.

“I dragged my mother to a wall and leant her against it. I thought she had fainted, so I sprinkled some water on her face,” she recalls. “But she didn’t wake up.” 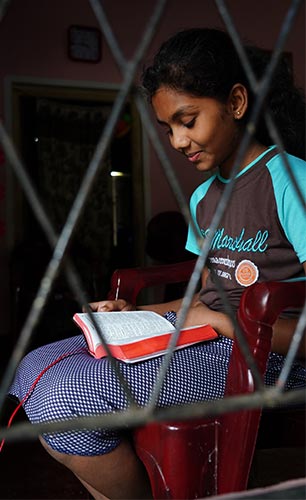 Dukashini reading from her Bible

Girija never recovered consciousness and died eight days later. More than 350 people were killed by the terrorists that day, in three churches and three hotels. Since then, dozens of people have been arrested for their hand in organising the attacks. The terrorists belonged to militant radical Islamic groups, and many had ties to so-called Islamic State (IS).

For Dukashini, everything changed that day. Her mother was gone, and her father was left to care for her and her three siblings. Often, and especially in the rainy season, Prashanth finds it very hard to find construction work to support his family.

Thanks to your support and prayers, an Open Doors team has been standing with the family – and with many others who suffered through this event.

“We have seen the family of Christ unite together, to grieve, to comfort and to support,” said Open Doors partner Sunil* “No persecuted Christian should have to feel alone. We will continue to stand by them, for as long as it’s needed.”

Open Doors was able to help the family, buying Prashanth a tuktuk, a small three-wheel taxi, which allows him to provide for his family.

“My only aim now is to take care of my children,” he says. And, because he now works for himself, he can work the hours he chooses.

So now, every Sunday, Prashanth takes his three children to church – just as his wife always wished. And every evening, his daughter Dukashini takes the role that Girija had: she reads the Bible to them all.

Open Doors staff asked Dukashini to read a passage from the Bible – and she chose Psalm 23. You can listen to her reading it, in her own language, at the link below.