You've brought 21,000 relief packages to Syria during the pandemic

In the past year alone, as the pandemic has given Syria another crisis to withstand, you’ve provided more than 21,000 relief packages for churches and local partners to distribute. It's one of a mutitude of ways you've come alongside the Syrian church in the ten years since the start of its civil war. Thank you, and please continue to support them as multiple crises continue to make life immensely challenging for people.

The civil war in Syria, which began 10 years ago, has brought destruction to the nation - and the conflict is still not over

It’s been ten years of conflict and crisis in Syria.

In March 2011, the spark for civil war was lit, leading to devastating human loss, destruction and displacement. This preceded an economic crisis only deepened with international sanctions. Last year, the global pandemic brought yet more death, grief, disruption and economic hardship, followed in the autumn by wildfires nationwide.

The pandemic has added to the vulnerability of Christians

“Due to the fierce war, many Christians have lost their source of income, their shops and even their own homes,” explains Ibrahim, who works with an Open Doors local partner and whose name we’ve changed to protect his identity. “Many had to flee their cities and villages to protect the lives of family members. Additionally, the Syrian currency drastically dropped and the salaries of those who had a job became insufficient to cover the very basic needs for a family.” 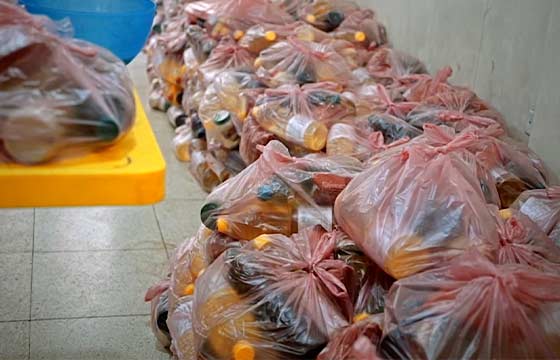 A sample of the more than 21,000 relief packages you've provided

“With all these people in dire need, the spread of Covid-19 rendered more Christians vulnerable and in need of urgent provision,” Ibrahim continues. “Those who have had an income before the pandemic have been negatively affected by the economic recession and the inflation the country has been struggling with since the virus hit the country.”

Over 21,000 relief packages filled and distributed according to need

Thankfully, the long-term presence of Open Doors local partners in the country – alongside your faithful and generous support – has meant that the Syrian church has been well-equipped to help address the urgent needs caused by the virus. In the last year, over 21,000 relief packages have been distributed, the contents of which vary according to different needs. This has included food, hygiene packs, disinfectant and face coverings. Several partners have also tried to create awareness to prevent the virus from spreading.

“We distributed food to hundreds of families,” reports Judy from the Nazarene Church in Latakia, which has supported 1,200 families. “We gave masks and sterilisers, and distributed medical aid including vitamin pills to improve people’s immunity. Thanks to your help we could help all those families with food and material to protect themselves against the virus. Because of your help we know that there are people who care about us.”

Life was already unbearable for Syrians – then Covid-19 hit

Sadly, the church itself in Latakia has been hit terribly by the virus. “Our pastor and his wife contracted the virus,” Mousa Sankari shares. “With your help we helped them with medicine and hospital costs. Unfortunately, they both passed away. It was really painful for us to lose them both.”

“We have suffered so much in this pandemic as a church and as people,” Mousa continues. “Because of the ten years of war, we faced an economic crisis and, after that, the sanctions on Syria made things even worse and everything became double, if not triple, the price. The continuous currency inflation made life unbearable for Syrians and then Covid-19 was the final straw.”

"We thank God that, with your help, we are able to support Christians" Mousa Sankari

The need is huge in Syria, making your continued support invaluable

There is perhaps the temptation to think that Syria is on the road to recovery now that it’s not in the news as much, but Mousa stresses this is far from the truth. “The need is huge in Syria,” he says. “The war is not over, the sanctions are not lifted, the economic crisis is causing a lack of diesel fuel, food, electricity and even medicine.”

“The pandemic is not going away and is a big threat to people’s lives,” he adds. “Unfortunately, the situation is going from bad to worse. But we thank God that, with your help, we are able to support Christians with whatever means we get in the face of all these struggles.”

How to keep praying for Afghanistan