Please pray for four Christian men in Venezuela as they recover from a horrifying attack in which they were beaten, marked with Xs using knives, and forced to eat sheets of the Bible. They were part of a drug rehabilitation programme set up by Pastor Dugarde and his wife which the attackers are believed to oppose. Please be aware that this article includes an image which you might find distressing.

Four Christian men were attacked with knives and sticks and forced to eat sheets of the Bible in a recent, shocking incident in Venezuela. It took place in Libertador, a city in Mérida state. The perpetrators are believed to oppose the work of Restoration House, a church-led drug rehabilitation programme which the four victims had joined.

In Latin America, the illegal activities of drug gangs are endangered by churches who deter people from criminality. This can lead to opposition against Christians and may explain this latest incident in Venezuela.

Opposition and threats emerged in weeks leading to attack

The four men were in the house when eight hooded men broke in and began hurling curses at them. The group destroyed the house, scarred the men with Xs and forced them to eat pages from the Bible. “The criminals covered our faces and started to beat and stab us,” one of the victims reports.

Pastor Dugarte, who set up Restoration House with his wife, says that threats about the home had been made prior to the attack. “Weeks before the attack, in the middle of a meeting discussing neighbourhood issues, two men said they were going to end the Restoration House because they did not agree with this type of programme,” he reports.

To appease neighbours, Pastor Dugarte agreed with the neighbourhood council to reduce the beneficiaries of the house from ten to six men. However, the two men still took issue with the programme. A few days before the incident, the attackers asked Pastor Dugarte for a list of people in the rehabilitation centre, but the pastor refused them.

Exact details behind motive and nature of attack unclear

The four men have since been discharged from hospital. One of them remains in particularly poor health, with injuries to his lungs and head, and two broken ribs. Two others have their legs and arms in casts. 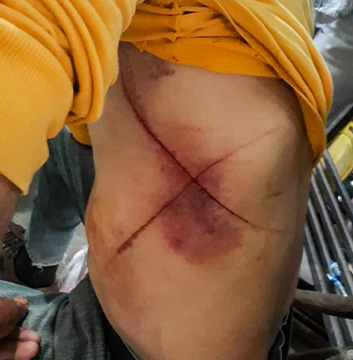 The four men were
scarred with Xs

Although opposition to the centre likely prompted the attack, there are questions for Pastor Dugarte, and other pastors in the city, over what lies behind this hostility and what drove the particulars of the attack: Why were Xs marked on their skin? Why was the pulpit destroyed? Why were the four men forced to eat pages of the Bible? And why were curses spoken against them and against God?

Pastor Dugarte – who has filed a complaint against the two men from the neighbourhood meeting whom he believes led the attack – says he will continue with the restoration programme in time, although he recognises that there could be repeat attacks. Given the ongoing threat, the victims and the pastor are currently living in alternative accommodation.

Venezuela has a population of 28.6 million and is predominantly Roman Catholic (96 per cent). Around two per cent are Protestant. Venezuela isn’t in the World Watch List Top 50, which highlights how unusual this kind of attack against Christians is in the country – though Christian persecution in other parts of Latin America is increasing.

In many countries around the world, attacks against believers are sadly all too common. Get an overview of Christian persecution in the top 50 countries of the World Watch List by ordering your own copy of the Top 50 booklet. This also features articles on the key trends from the latest report as well as stories from the persecuted church.