New laws or ‘Regulations on Religious Affairs’, in China came into force just two months ago (1 February). No one is sure yet what impact they will have for the estimated 97 million Chinese Christians. Just last month the People's Congress voted to extend President Xi's office from two terms to life in a move that many think could have significant impact on China's future.

New laws or ‘Regulations on Religious Affairs’, in China came into force just two months ago (1 February). No one is sure yet what impact they will have for the estimated 97 million Chinese Christians. Just last month the People's Congress voted to extend President Xi's office from two terms to life in a move that many think could have significant impact on China's future.

Christian leaders across the country are divided over whether this could herald the end of an era which has given the church more freedom than it has enjoyed for the past thirty years or whether little will change in practical terms for the nation's Christians.

Pastor John* from Zhejiang province said, "My grandparents were executed because they were Christians, I'm proud to be the fourth generation of Christians in my family. They will never stop us from believing – we have experienced pressure and persecution in the past – we're prepared for it. The authorities invited me to ‘take tea’ – I spent 13 hours at the police station and drank 27 cups of water. They tried to make me take down the cross from my church in 2015. I told them I wouldn't dare to do that but they could take it down. I told them to be careful because it's up high and a dangerous job. I told them we would pray for them in case there was an accident. The whole church prayed. Just before they came there was an explosion so they couldn't take it down that day. The next time they came with a machine to lift them up to remove the cross but the machine broke down. After that they gave up. I am not worried about the future."

‘Waiting to see what happens’

Pastor Adam* from Beijing told us that he has already seen changes made to prepare for a possible increase in law enforcement. He teaches at an unregistered seminary with about 50 students training to lead unregistered house churches. The authorities turn a blind eye as long as they don't draw attention to themselves or cause trouble. Pastor Adam said, "The seminary has already split into three. My church is waiting to see what happens. In the meantime we're training more small group leaders so that if we need to break into smaller groups we are ready."

Other churches have already fragmented; another pastor, James* from Beijing, said: "Five years ago we realised we needed to change. We broke into 10 smaller groups of 5-8 people to share the word. I have given my church leaders training to help them prepare for a possible increase in pressure from the authorities but they haven't really taken it in because they think this storm of pressure is a long way off". Another pastor, Solomon* from Beijing said: “House churches have been used to making changes for a long time. The situation has been improving for us but I think we are seeing signs that things are turning backwards.”

Some think the regulations are the least of their problems. Pastor Mark* from Beijing observed: "We are a very young Church in China, we've grown rapidly. We need more biblical training.  We can't even have normal communication channels with the outside world. We have no Gmail, no What's App, no Facebook. Compared to the lack of communication channels the new regulations are a small thing.

"Nowadays 'China' is much more powerful than it was 30 years ago. From a spiritual point of view we don't know what will happen tomorrow. I want to do what's right today and I'll leave tomorrow to God."

Open Doors is supporting Chinese churches to prepare for any possible tightening in their situation by providing support and guidance in facing challenges through training on discipleship, stewardship and preparing to face persecution.

In China’s Xinjang province all citizens are very closely monitored. This province borders many countries including Afghanistan, Pakistan and India that are significant for China’s massive One Belt, One Road infrastructure initiative designed to open up trillions of dollars of trade to the East through the creation of a new silk road. Citizens who are active in any religious faith are carefully observed and the government runs mind transformation camps aimed to counter religious extremism. Although they are officially aimed at controlling radical Islamic influences, Open Doors has heard anecdotal evidence that many Christians from a Muslim background are being detained in these camps.

The pastors interviewed for this piece were all keen to continue their outreach work and expand their support for the community. They want Christianity to flourish. In the face of a rapidly changing China they need to be agile in their survival tactics. Judy*, a Christian leader, summed it up:  “You can be a black cat or a white cat – it doesn't matter as long as you catch the mouse!"

In China the Church is split into the government licenced Three Self Association of Chinese Protestant churches and any other unlicensed church. Unlicensed Churches are known as House Churches.

The three selfs are: 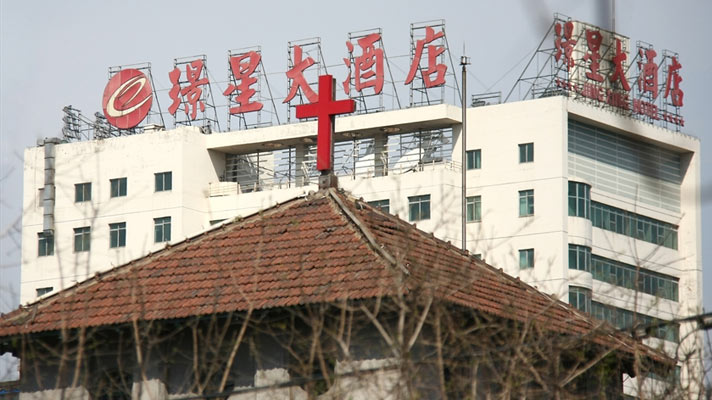 A church in North East China

China’s 1.3 billion population is predominantly atheist. Open Doors researchers estimate 97 million people are Christian and of these approximately 20 million born again Christians in China. It is estimated that Christianity in China is growing by about 5% per year.

An estimated 88 million Chinese are members of the officially atheist Chinese Communist party. Party members have to be atheist. This rise of Christianity with the number of Christians outstripping the number of Chinese Communist Party members presents a difficulty. Until thirty years ago Maoism or Mao Zedong Thought (as it is known in China) was the dominant, state-enforced ideology. As such, the Communists condemned religion as ‘the opiate of the people’. China has adopted a more liberal stance in recent years which has seen Christianity flourish.