Sri Lanka was rocked by some of the deadliest Easter attacks on Christian targets in history. Three churches and three hotels were initially bombed, at least one of them by a suicide terrorist. Two other explosions took place later.

Sri Lanka has been rocked by some of the deadliest Easter attacks on Christian targets in history. Three churches and three hotels were initially bombed, at least one of them by a suicide bomber. According to the latest information available, two other explosions took place later: one at a house where the police were attempting to arrest some suspects, one at a guesthouse.

Official sources now report that the death toll stands at 253, with at least 500 people wounded.

“It’s clear that these attacks affect the lives of thousands whose lives will never be the same again,” writes our regional expert.

Open Doors co-worker Sunil* is on his way to the disaster areas, although the government-imposed curfew has made travel difficult.

The six initial blasts occurred in St Anthony’s Church in Kochcikade, Colombo, St. Sebastian's Church in Negombo, Zion Church in Batticaloa, and at the Kingsbury Hotel and the Cinnamon Grand Hotel in Colombo. The five star hotels were all offering special Easter themed breakfasts, while all churches celebrated the resurrection of Jesus Christ with an Easter service. One explosion occured in the residential district Dematagoda and one in a hotel near Dehiwala Zoo.

Sunil reports: “At the church in Batticaloa, even though only 28 people have been confirmed dead, many more people - mostly children - are still missing. The police have enforced a curfew until further notice and all social media has been blocked. So much traffic on the main roads as people rush to go home but other roads are deserted.”

Please pray for Sunil and others who are offering support.

“Please pray for all the people who were affected by this. Many are injured or grieving the loss of loved ones. Pray for strength and comfort and for His healing hand upon them.”

The Open Doors team says, “In the midst of all these terrible events, we take comfort in the truth that He is risen. Thank you all for mobilising prayer for Sri Lanka. Let‘s continue to be on our knees.”

Note: This page was updated on 29 April 29 with the revised death toll figures from the Sri Lankan government.

Christians at risk at Easter

Sri Lanka is number 46 on the Open Doors World Watch List. The country is a majority Buddhist nation, and so while Christians from more historical churches enjoy a little more freedom in expressing their faith, believers from Buddhist backgrounds are particularly vulnerable and are treated as second-class citizens often facing facing slander and attacks.

After decades of ethnic tension, a civil war broke out in 1983 where the Sinhalese Buddhist majority fought against the Tamil minority (predominantly Hindu, but including a considerable number of Christians). Even thought the war ended in 2009, true peace and reconciliation is still far off.

In recent years, radical Buddhist groups have sprouted up across the country and were used by the previous government as a means of keeping religious minorities in check. Both Christians and Muslims have faced attacks from local groups, frequently led by saffron-robed Buddhist monks. Sri Lanka is 46 on the World Watch List of countries where Christians face the greatest persecution.

However, bomb blasts are not the style of Buddhist nationalist extremists and the likelihood is that this is the work of Islamic extremists. In recent years these groups have launched bomb attacks on Palm Sunday 2017 in Egypt (45 death) and Easter 2017 in Lahore, Pakistan (75 death).

The sad truth is that in many countries Christians run a higher risk of being assaulted during Christian holy days such as Christmas and Easter.

As Open Doors workers head to the area, please join your prayers with the thousands of others who are praying.

Our co-worker in this region texted: “Our prayer teams have been motivated and more than 6000 people are praying.”

You can give to Open Doors work in Sri Lanka: £51 could enable local teams in Sri Lanka to provide rapid relief for believers who have been impacted by persecution. 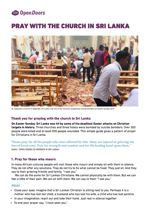 Prayer Guide: PRAY WITH THE CHURCH IN SRI LANKA

We have created a free, downloadable guide to help individuals, churches and groups pray for Christians in Sri Lanka at this time. It contains information, prayer points, meditations and reflections to help you pray.