People were surprised when they saw George alive. Your help gave him hope.

George and his family had almost nothing when their house was destroyed. Thanks to your help, George got a microloan so he could rebuild his life and start working again.

Everyone thought George was dead.

Not just George – his entire family. They were all in their apartment in Aleppo, Syria, when the rocket hit. The city was being attacked every day, but this was the first time he and his family had been in the line of fire. By a miracle, George, his wife, two daughters and a son-in-law survived.

“On the news it was mentioned that we died,” George said. “People were surprised when next day they saw my wife walking.”

The right time of year for resurrection stories. 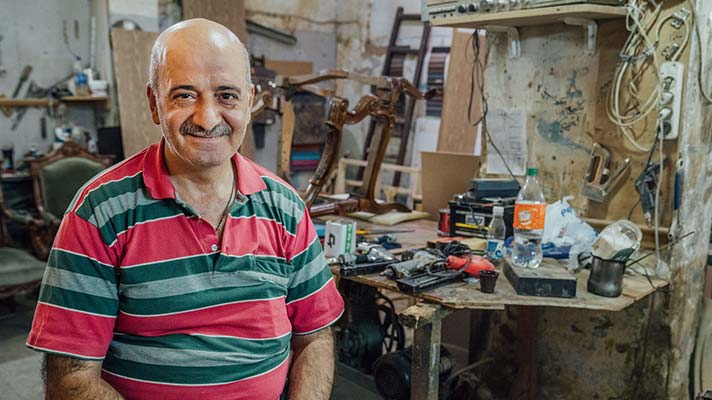 George in his furniture shop

“It is a miracle that none of us four got killed,” George says. A miracle and a promise: only a few days before the family felt that they had heard from God: “We were praying and my daughter opened the Bible and felt the Holy Spirit saying to her: ‘You will be safe.’ ”

Even so, their life was in turmoil. They were alive, but they had almost nothing left. The rocket destroyed not only his home, but his furniture business. The local government promised help, but nothing was done. They burned through their savings. George found what work he could, collecting garbage. He spiralled into depression.

"I have hope again"

Then George was contacted by an Open Doors partner – the Alliance Church in Aleppo, which is a Centre of Hope. He was given money to pay his rent and buy vital medicine. And a microloan to restart his business, giving him hope and self-sufficiency for the long term.

“If I hadn’t had this help, I would have died of anguish,” George says. “The church helped me to stand on my feet. Through the microloan I have hope again.”

Now he has a basement workshop, with wood shavings and sawdust on the floor, chairs and sofas being restored, broken furniture brought back to life.

“I used to collect garbage,” he says. “I had no clothes. People gave me the clothes of a dead person. We were in deep need. Thanks to the help of the church now I can work. Through the project I now have a decent life, I can eat and drink.”

Life is still challenging. “We’re living day by day,” he says. “But before I was below zero. Now I am on the second step of the ladder, because of the church.” 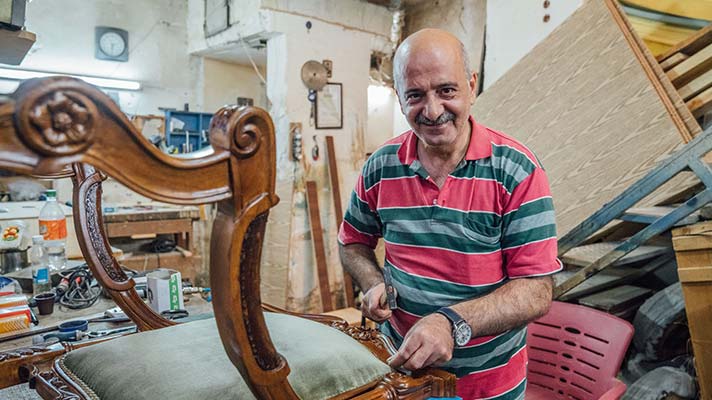 George in his furniture shop

This project is one of many that have been started in Aleppo through microloans, giving thanks to your support. And there could be many more, helping Christians like George to stay in their homes.

As Pastor Abdalla of the Alliance Church explains, they are keen to give opportunities through microloans: “Sometimes they have some money, but in most cases they have nothing but their experience. We look if they had a workplace in the past that could be restored; we look at what contribution is needed – rent, material and so on.”

Then people like George receive money that is part loan and part gift – with repayments from the loan going back into further income-generating projects. With your prayers and gifts, more and more Syrians can get back to the livelihoods they built up before crisis came to the country, supporting their families and rebuilding their communities.

And the more Christians who can stay in Aleppo, the more opportunities there will be for others to hear the good news of Jesus Christ.