The portraits in the exhibition were painted last summer when Hannah Rose Thomas and clinical psychologist Dr Sarah Whittaker-Howe travelled to northern Iraq. One Yezidi woman, Nazu, 19, painted red tears streaming down her face to her lips. She explained that her mother used to say that tears are sadness which touches your lips but one day happiness will touch your lips and you will smile again. Nazu has not seen either of her parents since IS took them captive.

Open Doors teamed up with British artist, Hannah Rose Thomas, to hold an art exhibition in Westminster The exhibition featured moving self-portraits of Yezidi women who are dealing with immense trauma after escaping the self-proclaimed Islamic State (IS).

The portraits in the exhibition were painted last summer when Hannah Rose Thomas and clinical psychologist Dr Sarah Whittaker-Howe travelled to northern Iraq. One Yezidi woman, Nazu, 19, painted red tears streaming down her face to her lips. She explained that her mother used to say that tears are sadness which touches your lips but one day happiness will touch your lips and you will smile again. Nazu has not seen either of her parents since IS took them captive.

Zoe Smith, Head of advocacy at Open Doors said: “If this exhibition does nothing else, it highlights the immense vulnerability of religious minorities in the Middle East. These women have suffered so horrendously and in such high numbers because they were from a religious minority that was considered expendable by IS.

“It is this toxic pairing of vulnerabilities – of gender and of faith – which led to the thousands of Yezidi women being forced into sex slavery. And it is not just happening in Iraq – only last week we heard the story of Boko Haram releasing scores of recently captured school girls in Nigeria but chillingly keeping the one Christian girl behind. This double vulnerability is a global phenomenon with the potential to blight the lives of all women within minority religious or ethnic communities. It’s been ignored. It cannot be any longer.”

A voice for minorities

Rt Hon Alistair Burt MP, Minister of State for the Middle East at the Foreign and Commonwealth Office and Minister of State at the Department for International Development said, “Reading the individual stories are desperately harrowing. It is all very well to understand what has happened to these women in general, but when you read the individual stories of separation and abuse it is all very hard. It’s been important to see. I am very pleased the exhibition is here. I hope that in some way it makes a better contribution for these women and the areas in which they live.”

The artist, Hannah Rose Thomas said, “The purpose of the art project was to use art as a tool for advocacy, so I was teaching the women to paint their self-portraits as a way to share their testimonies and their stories of grief. The women themselves know that their paintings are in parliament. To be able to show their paintings here in the place where laws are made – a place of influence that can potentially change people’s hearts and policies towards the Middle East and help minority groups is such a privilege. To give them a voice is an incredible honour.” 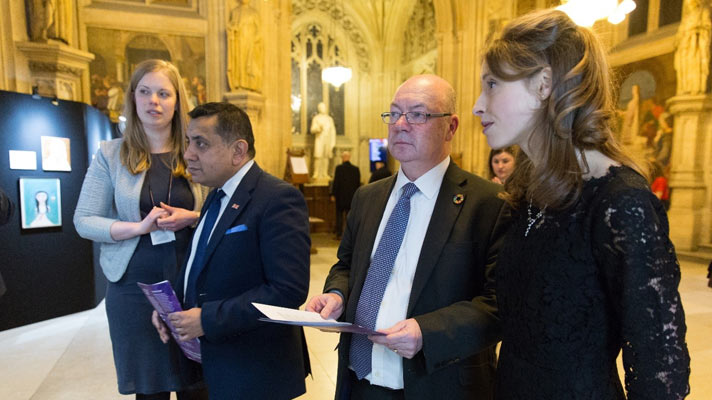 The exhibition was a great success, with many MPs in attendance who had never engaged with Open Doors before. This gave us the opportunity to speak to even more MPs about the persecution faced by our brothers and sisters.

An amazing 80 MPs and 11 Peers visited the display including Foreign Office and International Development Minister, Alistair Burt, who found the stories of persecution ‘deeply harrowing’. Each parliamentarian that visited the display received policy recommendations outlining what more they can do to protect our persecuted family, with many committing to take action. This was only possible because just short of 3,000 Open Doors supporters emailed and tweeted their MPs about the exhibition. Thank you so much!

Below is a list of MPs who attended the exhibition. Did your MP attend?

A number of Peers also attended the event and made commitments to do all that they can to help. They were:

Hope for the Middle East

Running from 26-29 March, the exhibition – Yezidi Women: ISIS Survivors – was hosted by Rt Hon Dame Caroline Spelman MP. It advocated on behalf of the Yezidi community and others who have experienced similar abuses, urging the UK government to act by supporting and empowering minorities in the Middle East to rebuild their lives. In particular, the exhibition presses the government to respond to the double-vulnerability faced by women in these communities who are targeted because of their minority faith and their gender. Open Doors is sponsoring the exhibition in parliament as part of its Hope for the Middle East campaign. As part of this campaign 808,172 people from 143 countries worldwide signed a petition which called for Christians and other minorities in Iraq and Syria to be given the right to equal citizenship, dignified living conditions and a prominent role in reconciling and rebuilding society. In December 2017 this petition was presented to the UK Prime Minister Theresa May, to high-level UN officials, and to the Vice President of the USA Mike Pence, amongst others.

Father Daniel, an Open Doors partner from Erbil, Iraq, met with Prime Minister Theresa May to present her with the petition and an Arabic Bible retrieved from a burnt out church in Karamles, Iraq.

Later that day, Father Daniel addressed MPs in a briefing hosted by Dame Caroline Spelman MP and Kate Green MP. The event was entitled ‘Hope for the Middle East: What next for Iraq and Syria?’ Attendees were given a copy of the report, outlining the latest developments for Christians in Iraq and Syria. Dame Caroline Spelman MP said, “We must focus our attention on empowering minorities in the Middle East as they seek to rebuild their lives. The Hope for the Middle East campaign, which I whole heartedly support, presses us to do this and at a recent meeting with the Prime Minister we were able to emphasise the need to support Christians and other minorities during this critical period in their reintegration.”