Many of the towns we live in or visit have dozens of restaurants. In Ibrin in Syria, there wasn’t even one – until you stepped in this year to help a local Christian open the town’s first and only restaurant. Joseph Hakimeh’s new café is one of over 1,700 income-generating projects you’ve helped set up as part of our Open Doors’ Hope for the Middle East campaign, which is now in its sixth year. 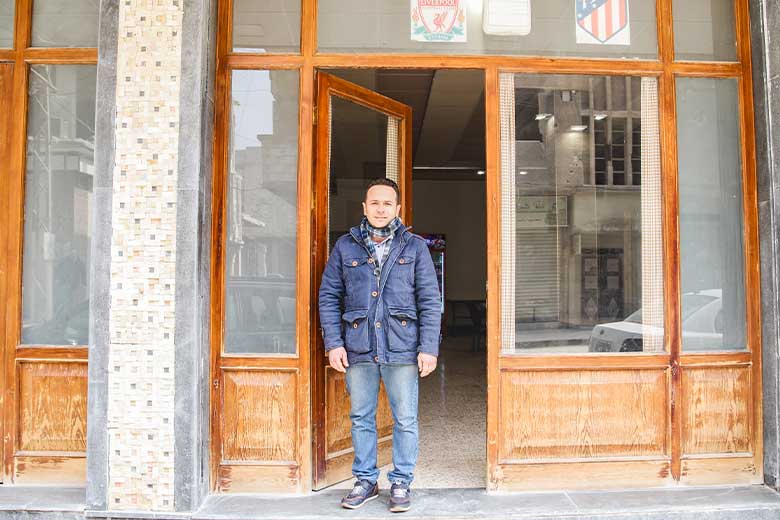 "You are giving a dose of hope and optimism to broken and exhausted people," Joseph says of your support for his new business

Six years after Irbin was captured by rebels, Joseph Hakimeh returned to discover the town he once called home destroyed. “My heart was grieving,” he says. “Yet I decided not to surrender and promised myself to come back.”

It was then that he had a bold idea – one which you have helped him fulfil.

“The first time I returned to Irbin [a suburb of Damascus], the thought came to my mind that I should open a restaurant here,” he shares. “There is no such place in the whole area.” This year, with your help, Al Yousef Café opened.

Bake With Them
Make dishes from Nigeria, Syria and India to raise funds for your persecuted family
ORDER YOUR PACK

“It is a place for the youth to gather, to play games, to watch football and for families to have a nice dinner together,” Joseph, now 42, explains. “Our space is also used for conferences. We’ve already had a doctor doing an educational conference for women. It is the only spacious hall in the city.”

This year marks ten years since Syria became engulfed in conflict. It was a year later, in 2012, when rebel groups forced Joseph, his wife and three children to flee Irbin to Damascus. They were among the thousands of Christians in Syria who were internally displaced because of conflict.

“That period was very hard, we didn’t know what to do or where to go,” Joseph remembers. “I have a family to look after. I studied electrical infrastructure, but I couldn’t find a good job. We went through tough times.”

“As soon as the road to Irbin was reopened I was on it,” Joseph continues, reflecting on the moment when the Syrian government retook the town in 2018. Returning there he witnessed desolation but, with the restaurant, also an opportunity. Three years on, the café is now open and Joseph hopes that all his family will soon be able to return to Irbin to live.

It’s similar for many Christians who lived in areas controlled by rebels. They don’t feel comfortable returning yet or, if they do, they’re unable to because their homes have been destroyed. Open Doors partners are helping vulnerable families rebuild their homes and communities – and, as with Joseph, restoring or finding new livelihoods so that families can have hope for the long-term.

For Joseph, the opening of the restaurant is the first step towards a bigger dream. “My dream is that Irbin will be restored to how it was before the war,” he says. “I was born here, as were my wife and three children. I want to bring my family back and settle here. The community of Irbin is very family friendly. The church taught us loyalty and care and that we are one family. I was raised this way and I want my children to experience this as well. I am very hopeful for the future; my children are a source of my hope.”

‘You’re bringing hope to many Syrians’

You are contributing to this hope. “The money you are donating is truly saving families from underneath the ashes,” Joseph says. “You are giving a dose of hope and optimism to broken and exhausted people. May God strengthen you and bless you. You are a source of joy to me and many others who get help from you.”

Amazingly, Joseph’s story is not unusual – again, thanks to the incredible generosity of Open Doors supporters like you. Through Centres of Hope run by Open Doors partners in Syria (40 in total), 1,734 income-generation projects have been created, helping people like Joseph start a restaurant, shop, small factory, workshop or agricultural business. Five have been started in Irbin. As Open Doors’ Hope for the Middle East campaign enters its sixth year, you’re helping ensure that hope continues to shine in the darkest places.

“This gives them the opportunity to support their families and build a future again in their country,” shares an Open Doors local partner. “It encourages brothers and sisters around them, when they see them succeed. You’re bringing hope to many Syrians. Amidst the destruction in the country, these are the burning candles of hope, showing that the situation in the country isn’t only one of deep sadness and despair. The war doesn’t have the last word.”

You can support the persecuted church in the Middle East with your gift: