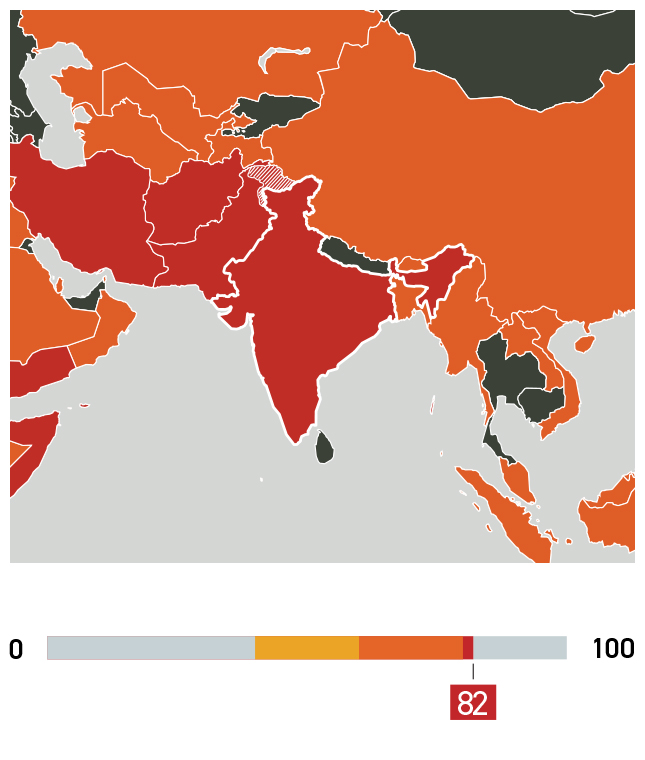 How many Christians are there in India?

There are a large number of Christians in India – 69.5 million – but it’s still only five per cent of the country’s Hindu-majority population.

How are Christians persecuted in India?

India is a diverse, democratic country with religious equality supposedly enshrined in law – but in 2023, in some states, it's a scary place to be a Christian.

‘Only Hindus are true Indians’. That’s the false ideology that has been on the rise in recent years – called Hindutva, it says that Christians, Muslims and other religious minorities have 'foreign' roots and must be expelled. Hindu extremists seem able to attack others with impunity, even using extreme violence in some parts of the country.

Increasing numbers of states are implementing anti-conversion laws, supposedly to stop Hindus being forcibly converted to other religions, but in reality they are often used as an excuse to harass and intimidate Christians who are just doing things like distributing aid or having a private church meeting. These laws do not seem to protect Christians from being coerced back into Hinduism.

Christians increasingly experience social exclusion in their communities, discrimination in the workplace, and have false accusations and rumours spread about them.

The Christians most at risk are those who have come to faith from a Hindu background. In some parts of India, many face constant pressure to return to Hinduism, social exclusion, discrimination at work, physical assaults and are sometimes even killed. Church leaders are particularly vulnerable too; being a pastor is one of the riskiest vocations in the country today. Hindu extremists target them, their wives and children with violent attacks to sow fear in the wider Christian community.

“God sent you as divine helpers. When everything looked dark, your prayers uplifted me.”Mehr, who was nearly killed and then refused medical treatment for being a christian

Mehr (name changed) and her mother and sister were persecuted by their community after they became Christians. They were seen as traitors to ‘the nation’s religion’ of Hinduism.

“When we accepted Christ, the people in our community accused us of taking money to become Christian,” says Mehr. Many Christians are falsely accused of this, and targeted by the anti-conversion laws that have now been passed in 11 states. “We denied such accusations – we told them, Christ did not come for religious conversion. He came to change lives. When we come to the Lord, we receive peace. We are filled with joy.”

Mehr’s words didn’t make any difference. The villagers kept persecuting Mehr and her family. “They isolated us, hurled lewd comments at my sister and me, and shamed us for being involved in ‘illegal’ activities. They constantly used abusive words and mocked us. It was hurtful.”

One day, this escalated into physical violence. A mob began attacking the three women. “The attackers started to beat me mercilessly and tried to strangle me with a cloth,” Mehr says, with tears in her eyes as she remembers the traumatic event. “I fell unconscious. I was wounded and bleeding and suffered several injuries across my body.”

With all the trauma and anxiety Mehr was experiencing, she shouldn’t have had to worry about her medical treatment. But the persecution that Christians often face in India has far-reaching effects. The people who attacked Mehr and her family are very influential in their community, and they bribed the medical staff to stop treating Mehr because she is a Christian.

“The doctors were pressurised so that my treatment wouldn’t progress,” says Mehr. “The nurses didn’t come for my treatment and stopped all care. Medicine was also stopped. My heart was gripped with fear – I thought, ‘How will I survive?’”

Thankfully, Open Doors local partners are able to support Mehr. “As soon as Open Doors partners came to know about my situation, God sent them as divine helpers,” says Mehr. They were able to get Mehr transferred to a hospital that would treat her, and paid for the treatment. They are also supporting the family with financial help and trauma care for the long-term.

How can I help Christians in India?

Please keep praying for your brothers and sisters in India. Your gifts and prayers make an enormous difference to those following Jesus no matter the cost. Christians in India are struck down but not destroyed.

Lord Jesus, help our persecuted brothers and sisters in India to stand strong in their faith and show Your love and character to their local communities. We pray against the division and hate of Hindutva – may India live up to its ideal as a place of freedom and peace instead. Guard the pastors and their families who risk their lives to serve You, and replace lies and discrimination with truth and justice. Amen.