It’s a frightening statistic. Last year across sub-Saharan Africa, Christians faced up to 30 per cent higher levels of violence than the previous year. Unlike other parts of the word during the pandemic, where there was largely a drop in violence against Christians, the region has witnessed a spike in attacks – and there are little signs of it abating.

He goes by the name ‘Lucifer’ and Christians are his target. To him, Christians pervert the Bible and their prayers interfere with his dark powers.

His actual name is Ngaiman and he lives in the Central African Republic (CAR). In March 2019, he was abducted and tortured by Muslim rebels formed from the civil war that began in 2013 with the military coup that ousted President Bozize.

A year after his release, Ngaiman emerged with a new purpose – to advance the anti-Balaka cause. He isn’t targeting the Muslim rebels who abducted him but, rather, Christians. The anti-Balaka is often described as ‘Christian’, but believers distance themselves from the group which mostly comprises followers of traditional religions who use drugs and charms to fuel their activities and make them feel ‘invincible’.

After his father warned against targeting Christians, Ngaiman had him killed. And in May 2020, Ngaiman stepped up his campaign against the church. He went with some of his followers to a local church and arrived just as the leaders were leaving following a meeting.

Ngaiman and his men tried to enter the church’s compound, but a deacon stopped them. Ngaiman attacked the man. The church’s pastor, Georges Rondo, was called and, on arriving, courageously rushed to help the deacon. Ngaiman took out a knife and stabbed Georges to death.

"Our support to the church in CAR – a matter of life and death – must continue in earnest." Open Doors partner

Before leaving, Ngaiman threatened the other church leaders. Ngaiman has yet to be arrested, and in the continuing chaos that is CAR – a country rich in resources such as gold and diamonds, and number 35 on the latest World Watch List – ‘it is unlikely that he will ever be brought to justice, at least in this life,’ an Open Doors partner explained.

“This upsetting story of Ngaiman and his devastating quest is the tale of CAR,” the partner continues. “Violence has borne only more violence, and sadly those who suffer most have seen very little justice done for them. From the earliest days of the crisis, Christians have lamented the fact that they are not only caught in the crossfire between Muslim rebel groups and anti-Balaka, but face specific targeting by both. It also shows that our support to the church in CAR – a matter of life and death – must continue in earnest.”

That’s just one example of the violence Christians in sub-Saharan Africa face. For another, let’s look at July 2020 in Nigeria.

Hajaratu, from Chibob in the country's Middle Belt, was trying to cross a fast-moving river with her young daughter strapped to her back, fleeing an attack by Fulani militants. After being submerged in water and led astray by the dangerous current, Hajaratu reached the riverbank to discover she was alone.

EVERY £21
could give a Bible to three believers from a country in the World Watch List Top 10.
MY GIFT TODAY

“I began to cry uncontrollably,” she shares. There was nothing Hajaratu could do. The fast-moving river had tragically stolen her daughter.

For Hajaratu, it’s yet more unimaginable grief – just a year earlier, she lost her husband to an illness. It’s led to understandable questions and doubts: Why has this happened?

Last year in Nigeria, several hundred Christian-majority villages were attacked by militant Fulani herdsmen. Each year, more Christians are murdered for their faith in Nigeria than anywhere else in the world, and it’s getting worse. Meanwhile, collaboration between Fulani militants, Boko Haram factions and criminal gangs continued in the north of the country, exploiting the government’s loose control in the region.

It’s unrelenting - as recent attacks on Christians communities over Christmas, in which at least 28 people were killed, demonstrates - and explains why Nigeria has entered the top ten of the World Watch List for the first time.

Over the border in north Cameroon (42 on the World Watch List), Boko Haram and its splinter group, Islamic State of West Africa (ISWAP), reinforced its growing threat in the region, instigating some 400 violent attacks – a 90% increase on the previous year.

"And if we count the number of deaths, no, it is too much." 'Hamadou'

“There is always extreme fear,” says Sarata, whose name we’ve changed. In 2014, she lost her husband, Tetekwa, to a heart attack caused by the intense stress of imminent attacks by Boko Haram. The group want to destabilise communities in north Cameroon and expand its influence. Five years later, the extremists killed her 16-year-old daughter, Lydia, after she resisted kidnap.

“The most difficult thing is that these bad people are still roaming around,” Sarata explains. “It would be safest to just stay home. But we must go to our fields. Every day it is possible that they are waiting in ambush. We always fear.”

Coming alongside Sarata is Hamadou (name also changed), a church leader who is himself well acquainted grief – in 2015, an attack by Boko Haram on his village led to the deaths of 92 people, including his five-year-old son.

“There have been many attacks, I have lost count,” he says. “And if we count the number of deaths, no, it is too much. And all the houses that they have burnt and so many other things, I cannot count them. We chose to stay because we grew up here – I have my family here, I’ve built my house here. We can’t leave and go somewhere else. We do not have money to rent houses. That is why we have stayed. It is because of poverty. We have nothing.”

Rising tide of violence from Burkina Faso to Ethiopia

In 2019, Burkina Faso – once a beacon of inter-religious harmony – entered the World Watch List top 50 for the first time (it's number 32 on the latest list). Last year saw Islamists continue to target churches, including two separate attacks that killed 38 people. In neighbouring Mali (28), Western Christian hostages are still held and killed.

In Burkina Faso, Mali and Niger – part of the Sahel region, immediately south of the Sahara Desert – there were more than 85 attacks on places of education between January and July last year. The region has become a hotbed for violence, caused by Islamic extremism (fuelled by injustice and poverty), fragile governments and weak security forces. Covid-19 has only worsened matters. Christians said that lockdown made them ‘sitting targets’ as security forces colluded with attackers.

Elsewhere, a group popularly called Al Shabaab (different from the Somali group) wants to impose Sharia (Islamic law) across the poorly developed but mineral rich northern province of Cabo Delgado in Mozambique (45). Since 2017, more than 1,150 people have been killed in 600 attacks. The group has also attacked Christian villages across the border in Tanzania.

Meanwhile, in the Democratic Republic of Congo (DRC) (40), Christians have been targeted by a separate group with links to so-called Islamic State. The Allied Democratic Forces (ADF) have burnt churches and attacked Christian-run schools and clinics. More than 1,000 civilians have been killed since the beginning of 2019.

There are worrying developments, too, in Ethiopia (36). Ethno-political groups with religious undertones are growing in prominence, whilst Turkey, Saudi Arabia and Iran – with their own Islamist agendas – are pushing for regional influence.

Behind all these statistics are brothers and sisters who’ve had homes, livelihoods, churches and loved ones horribly ripped away from them. But they faithfully and courageously press on – with your prayers and support. Please continue to stand with them. 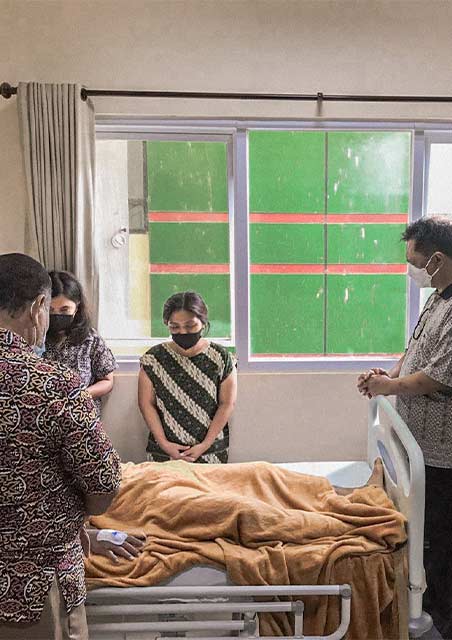