Serving Persecuted Christians Worldwide - Egypt: 'I would have been willing to die for Jesus' - Open Doors UK & Ireland
09 March 2018

Egypt: 'I would have been willing to die for Jesus'

It’s been just over a year since the day when a man ran into the women’s section of Cairo’s St Peter’s Coptic Orthodox Church and detonated the bomb strapped to his chest. The women’s section where Samiha was sat.

Samiha is a remarkable lady.

It’s been just over a year since the day when a man ran into the women’s section of Cairo’s St Peter’s Coptic Orthodox Church and detonated the bomb strapped to his chest. The women’s section where Samiha was sat. The peaceful atmosphere of the church vanished, to be replaced with screams, darkness and smoke. Qalini, Samiha's husband, rushed over from the men's section, desparately searching for his wife; he couldn't find her.

Samiha says what happened next. “I found my face wrapped by medical clothes. The doctor asked me, ‘Is your name Samiha Atopi?’ I said yes, that’s my name. He then asked me, ‘Is your husband’s name Qalini?’ I said yes. Because I hadn’t been identified, they had given me a number. Ninety-nine. No one recognised me because of my face.”

In the hospital, the doctors didn't offer much hope. She won't survive, they told Qalini.

The attack claimed 27 lives that day… and it left Samiha with only half a face.

'He wants me to live'

In August 2017, staff from Open Doors visit Samiha and her husband, Qalini, in their Cairo flat.

"The doctors might have given up on Samiha, but God had another plan!" Qalini quickly points out.

Samiha's face still isn't what it used to be, but the side of her face that is still intact glows when she smiles. "The doctors thought it was useless to treat me," she says, "so they just came to check on me every now and then to see if I was already dead. But I stayed alive."

Samiha's unwavering faith shines as she testifies to Jesus' presence with her through her ordeal. "I don't remember much of the explosion and the first days after it," she explains, "but I remember that I saw Jesus on the ceiling when I was lying on the ground after the explosion." She says that Jesus continued to appear to her, even in the hospital. She would mumble His name as she lay unconscious.

"I would have been willing to die for Jesus, but the fact that He kept me alive so miraculously tells me that He wants me to live." 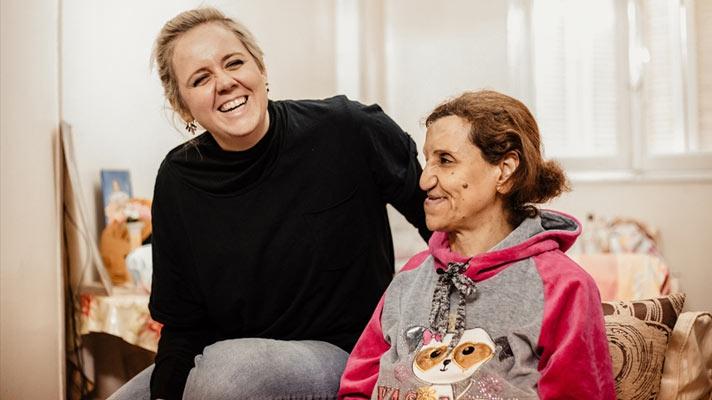 Qalini has struggled with forgiveness towards the man who attacked the church that day. "But my faith tells me to forgive, " he explains. "So every time I feel angry, I sit down with my Bible and browse to the Sermon on the Mount. There Jesus says we should forgive our enemies. It really helps me to read that part over and over again."

Amazingly, Samiha doesn't struggle with feelings of anger. Her incredible response? "If I would meet the family of the attacker, the only thing I would ask them is: 'Do you know Jesus?' I pray they will find the right way."

Samiha is hoping to return to Hungary for more operations that will alter her appearance.

YOU CAN BRING HOPE TO BELIEVERS IN EGYPT