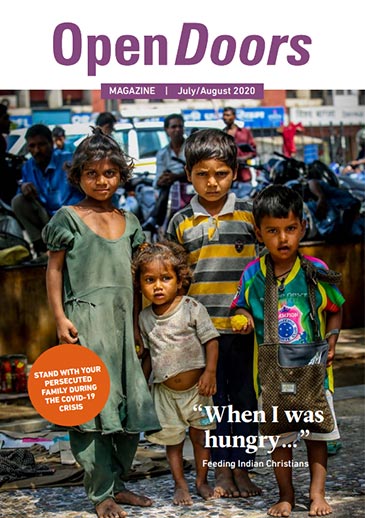 Christians in India are often last in line for essential Covid-19 food and aid because of their faith - and this is on top of the persecution they already face for following Jesus. Akash*, an Open Doors partner in India, explains how his team are helping those in crisis. Read Akash's story and much more in Open Doors' July/August 2020 magazine. *Name changed for security reasons

When Islèm wanted to find out about Christianity, she couldn't ask her Muslim family. So she searched online - and found a pastor through a Facebook group. She got a Bible and attend Bible study run by Open Doors partners. Now she can't imagine life without Jesus. Your support can mean more isolated, secret believers and seekers are reached and discipled. Read Islèm's story and much more in Open Doors' May 2020 magazine.

Rikiya was recently widowed when Boko Haram attacked her home in northern Nigeria. She managed to escape, but when she returned she found that her home and possessions were destroyed. Women like Rikiya are often face social and financial exclusion: they are targeted for their faith and vulnerable for their gender. With your help, they are receiving loans, aid and trauma care to help them on the path to self-sufficiency.

When Kim Sang-Hwa* found her parent’s secret Bible, she knew it could mean the whole family would be put in a concentration camp – or even killed. She had a terrifying decision: tell the authorities about her parents, or ask to know more about Jesus. Praise God, she chose the latter – and became a Christian. Thousands of North Korean Christians are making the dangerous decision to follow Jesus. Can you stand with them?

Shining with hope, standing with Syrian families this Christmas

Jina lost her husband, and Abraham lost his father, when Rober was kidnapped for his Christian faith in 2013. They still don't know if he's alive. Pastor Abdalla's church in Aleppo, Syria, is standing with them while they wait - and, thanks to your gifts and prayers, Jina and Abraham are among the many Syrian families receiving essential food and fuel and long-term support.

When war came to Aleppo, Pastor Abdalla felt God calling him to stay in Syria. His courageous obedience has helped keep hope alive in Syria during the crisis and beyond. He helped hundreds of people during the fighting, and he’s still there. Now that the crisis is over, his church is restoring hope to families and communities through microloans, training and aid.

"We are always facing danger": Strengthening the church in India

Abishek trusts in Jesus. That makes him a threat, according to the Hindu extremist movement in India. They have publically stated their aim to wipe out non-Hindu religions in India by 2021. It may sound impossible: there are 60 million Christians in India. But this threat is far from empty. If we don’t strengthen the church now, many people may be lost forever.