Courage and forgiveness shown by church bombing survivors in Indonesia

If your church was bombed while you were inside, would you want to go back to the wreckage? This is what the members of the Surabaya Pentecostal Church decided to do, just one week after their church was bombed by Islamic extremists, killing 8 people and injuring others. They have shown incredible courage and grace in the face of violent persecution. These are their stories.

If your church was bombed while you were inside, would you want to go back to the wreckage?

This is what the members of the Surabaya Pentecostal Church decided to do, just one week after their church was bombed by Islamic extremists, killing eight people and injuring others.

Rev. Yonathan Budiarto, the leader of the church, said, “We must not give in to fear. We must hold Sunday worship service as usual.” Church members gathered under a plastic sheet in the church car park. The church building was so damaged it was impossible to use; the debris had not been removed. Dried blood marks stained the floors. 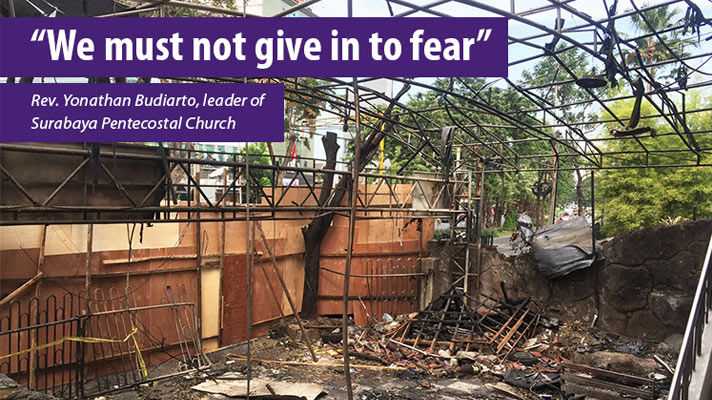 Robby, 62, is one of those attended the church service in the car park.

When the bomb went off, Robby was thrown metres from where he was sat. He rose immediately to look for his mother who had been sat beside him. Miraculously, she was still there, unscathed.

They went home to clean his face from blood, and discovered the right side of his back was wounded by shattered glass. “It hurts when I lay down. Then, as I remembered that Jesus was scourged, I suddenly felt like His arms were holding me and the pain began to ease,” he said.

Incredibly, Robby says he doesn’t feel angry toward the terrorists. “As Christians, we are taught to forgive. Revenge doesn’t get us anywhere; the cycle of violence will never be broken. The Bible says ‘do not let the sun go down while you are still angry.’”

Robby runs a small family business with his son, and they have many Muslim employees. He says that attack hasn’t damaged their relationships. “I have no hatred against them and they don’t feel any discomfort toward me. We are on good terms.”

At that Sunday worship service in the car park, unsurprisingly, Robby felt a little daunted. “But as the service progressed, my fear went away,” he says.

Your support and prayers have helped to provide financial support to ten families who have been affected by the bombings. Give to support Open Doors work in south east Asia.

The boy who died to save others

Daniel, 15, was killed trying to stop the terrorists’ bomb-laden car from passing through the church gates and into the building. He had volunteered to be part of the security team at the church to replace his grandfather, who passed away last year. His grandmother says, “He offered himself for the post; no one asked him to. He was enthusiastic about his role. He would come early on Sundays to secure the church premises before services started. I’m so proud of him.”

Daniel was very involved in the life of the church. After serving in the security team in the morning, Daniel would join the afternoon worship service, where he played the drums in the worship team.

Daniel and his sister had been living with their grandparents since their mother passed away when they were young. Daniel’s grandmother, who did not go to church on the day of the attack, was shocked at the news of her grandson’s death.

A few days after the funeral, reality began to sink in. No more of his leaning on her shoulder. No more of his laughter. But despite everything that had been taken from her, she decided to forgive the perpetrators. “We Christians are taught to love and to forgive. I don’t want to drown too deep in sadness. Instead, I’m happy that my grandson didn’t die in pain. He died a believer.”

And he didn’t die in vain. By stopping the car filled with explosives from getting further into the church, he saved many lives. Rev. Yonathan says, “I can’t imagine [the death toll] if the bombs had exploded inside the church.” 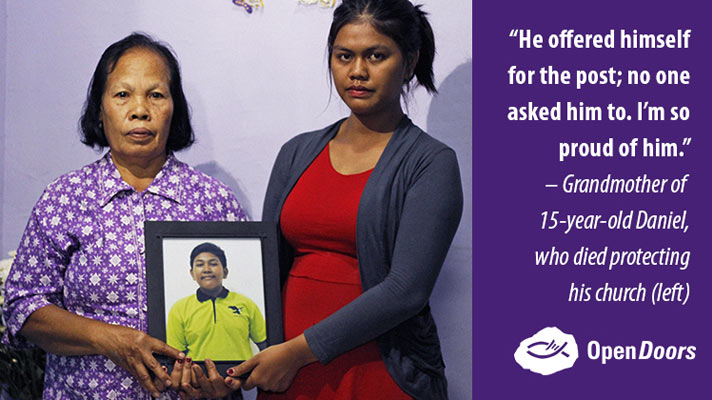 ‘The amazing power of a mother’s love’

Eight-year-old Clarissa was with her mother, Fenny, in a room where the Sunday school was taking place when the bomb went off. Fenny suffered 85 per cent burns, but was able to muster the strength to find her daughter and carry her to safety. Clarissa’s father, Erwin, says, “My wife was burning, but she kept searching for our daughter. Such is the amazing power of a mother’s love.”

At the time of writing, Fenny was still in intensive care. Clarissa was not as badly hurt as her mother, but was injured and traumatised by the attack. She fears the colour black, fire, loud sounds, women in veils, and going to church.

Erwin wondered why she feared women in veils when the bomber was a man in a car. Later, Clarissa said she had seen women in veils on the day of the bombing. “I’m now persuading her that not all veiled women are bad,” he said. “The most difficult part now is that Clarissa refuses to visit her mother. She keeps recalling my wife in black smoke. It saddens me very much.”

When asked if he is angry at the Islamic extremists who carried out the attack, Erwin says no. “I was upset – after all, I’m still human. But I don’t have any resentment towards them. I was a Muslim, now I’m a Christian, and the Bible teaches us to love those who harm us.”

Thank you for standing with your church family in Indonesia

Thank you to everyone who has been praying for our church family in Surabaya. Please continue to pray for healing, protection, and courage for them. Rev. Yonathan says, “We pray for the victims and church members. I am worried that they may be fearful of going to church after this bombing. We must continue to support them in prayer so that they grow stronger in their faith.”

Your gifts also enabled Open Doors workers to respond immediately to this crisis, visiting the families to pray with them and see what help they needed, and providing financial support for ten families who were affected by the bombings.

Give to support Open Doors work in south east Asia

Indonesia is number 38 on the 2018 World Watch List, Open Doors’ annual ranking of the 50 countries where Christians face the most extreme persecution. Find out more about the challenges facing our brothers and sisters in Indonesia.