As a minority in Bangladesh, Christians are acutely vulnerable to persecution. These three stories highlight how costly it can be to be a Christian in Bangladesh – which is number 31 on the World Watch List – and how, with your help and prayers, Open Doors local partners are coming alongside them to provide support – even if only to remind them that they are not alone. 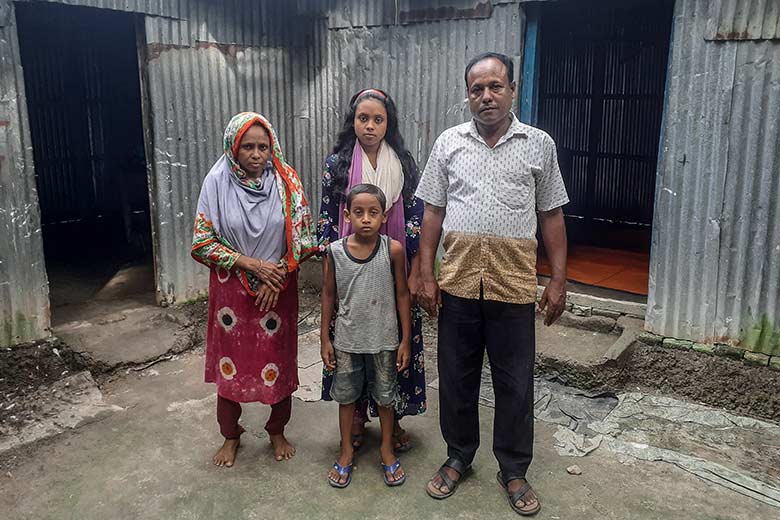 At first, Pastor Nurul and his family’s faith was tolerated. They share a home with his parents and the families of his six brothers and one sister. Amongst them, only one brother is a Christian. But as Pastor Nurul grew bolder in his faith, and more people gave their lives to Jesus through his work, toleration turned to hatred – culminating in an awful act of deception and betrayal.

Each week, Pastor Nurul hosted church at his home, as well as literacy classes which enabled him to share the gospel with his neighbours. From this class, six people have been baptised – and there is wider curiosity. “I see the interest of people to know about Jesus, but they are afraid to come to me and follow Jesus Christ,” the pastor shares. “They speak to me in secret. They want to join the literacy class but cannot come for the fear of persecution.”

As Pastor Nurul’s ministry grew more fruitful, the levels of hostility grew too. It began with verbal abuse. The pastor greeted it with silence, but that only provoked his family further, this time beating him. Still Pastor Nurul remained silent – and still he carried on with his ministry.

"They can take my home and rights away, but they cannot take my Lord Jesus Christ away" Pastor Nurul

The persecution grew and it led to his extended family forging a document stating that the land and property given to Pastor Nurul by his father was to be transferred to his siblings and their families instead. Pastor Nurul and his family were kicked out. Local Muslim leaders were convened to support this decision, and the pastor’s family were given a date to leave the village, otherwise they’d be dragged out and their possessions publicly destroyed.

Abandoned by family but embraced by you

Pastor Nurul and his family are now renting a home elsewhere. Open Doors local partners are coming alongside them to encourage them and provide prayer and food support. The pastor is a long-term friend of our partners; they’ve led several training sessions that Pastor Nurul has attended and provided a tube-well (a type of water well) for believers he pastors.

Understandably, Pastor Nurul is deeply upset and mentally drained, but he remains strong in his faith. “They can take my home and rights away, but they cannot take my Lord Jesus Christ away. My Lord is with me. He cares for me,” he says. “What they did was unforgiveable. But I have forgiven them for what they have done to me and my family, because I am a follower of Jesus Christ. I pray to the Lord to open their hearts so that they will find salvation and come to Christ.”

“I will continue my work of preaching and gospel sharing in the midst of the persecution,” he adds. “And I would like to continue the literacy class in future so that I can help the new believers and interested people to know about Jesus.”

Imagine that wearing one of your favourite t-shirts led to you losing your job. This is exactly what recently happened to 24-year-old Jobayer, another believer from Bangladesh who Open Doors local partners are coming alongside to support.

EVERY £20
could pay for four months of basic schooling for a child of a Christian pastor who was killed for their faith.
MY GIFT TODAY

Jobayer – a distributor and seller of electrical materials and mobile phone parts – came to know Jesus through his parents, who are evangelists. During a youth event organised by Open Doors local partners, Jobayer was given a t-shirt with the words “Therefore go…” written on it. He loved wearing it and made the bold decision to wear it to work.

His colleague, Ramzan, noticed the t-shirt and asked him what the words meant. “We, as followers of Jesus Christ, are commanded to go all over the world and tell the good news of the gospel, and baptise them in the name of the Father, the Son, and the Holy Spirit,” answered Jobayer. “As a Christian, it is our responsibility to share the gospel.”

This shocked Ramzan, who didn’t know of his colleague’s Christian faith. He acted normally and went about his work, until one evening he cornered Jobayer and told him to renounce his faith and return to Islam. Jobayer bravely refused. Ramzan then reached for a knife. “If you do not return to Islam, I will kill you,” he threatened.

“I did not realise that Ramzan would do such thing to me,” shares Jobayer. “All day long he was acting nice around me. That night I saw his anger that he had towards me and Christian people. I was praying for Jesus Christ to save me from him. That’s when he (Ramzan) left me there.”

Hounded out by colleagues

The next day, Jobayer was too afraid to return to work. Around noon, he received a phone call from his office requesting him to come in. He arrived to discover all staff gathered waiting for him. They interrogated Jobayer, asking him why he converted, and how much money he had received for it. Jobayer denied the allegation and, with remarkable courage, publicly declared his faith in Jesus.

This further angered his boss and colleagues, who mocked, slapped and hit Jobayer, before hounding him out of the building and telling him he was no longer welcome. Jobayer was devastated, as it left him unable to support his family. He is fearful that his former colleagues will come after him again, or target his family.

Open Doors local partners are praying with Jobayer, and seeking ways to support him and his family during this distressing time.

“In prison, I had a nice time reading the Bible and praying”

Another believer from a Muslim background who Open Doors local partners are helping is Sams Uddin.

The 60-year-old vet was attending veterinary training when he was arrested along with 17 other vets and trainers (all non-Christians) for alleged involvement in Jamaat-e Islam, an Islamist political party. The family were deeply concerned that Sam Uddin’s faith, and his involvement in Christian ministry, would make him more vulnerable to prosecution.

Thankfully, Sams Uddin has since been released on bail – and he reports that his time in prison provided unexpectedly fruitful.

“In prison, I had nice time reading the Bible and praying,” he shares. “I was confident that I would come out from the jail soon because I did not do anything wrong. I had confidence in my Lord. I was the only Christian among the prisoners, and in knowing that, the prisoners showed enough respect to me.”

Sams Uddin was tearful as he spoke to Open Doors local partners, who are seeking ways to further help him and his family. He said, “I am thankful to all the friends who prayed for me, visited me in prison, and helped my wife to take necessary steps for my bail. It encouraged me and strengthened me to be calm and steadfast in prison.”